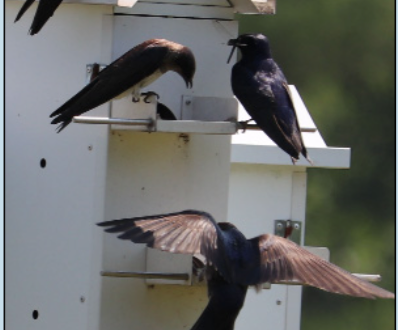 Oh, those remarkable Purple Martins! June was a very productive month for our martins. Thirty-nine breeding pairs produced 155 nestlings growing and expected to fledge in July and about 10 eggs due to hatch in July and fledge in August. The normal clutch is four-to-six eggs, but our pairs produced one clutch of 7 eggs and one of 8 eggs. The average incubation period is 16 days, and martins typically fledge 28 to 32 days after hatching.

It has been a productive breeding season for the Tree Swallows as well; 35 swallows fledged in June from seven nests, and a few more nestlings will mature and fledge in July.

We heartily welcomed Brett Davis to our team this month. He arrived just in time to help with our challenging Purple Martin monitoring.

As always, our team would be happy to include you in a nestbox check. If interested, please email me.

Many thanks to Peter Cappellino and his daughter Amelia, who photographed many of our martin nestlings this month. Thanks also to Theresa Zmola, who has contributed so much of her time and talent to the NestWatch project, and to her son Ethan, whose assistance this season has been so appreciated.